What’s Safer in an Accident: Is an SUV Safer than a Car or Sedan?

If you have been involved in a an SUV or car accident in the Tampa Bay area call Tampa Personal Injury Attorney, Martin J. Hernandez of Fernandez & Hernandez at 813-229-5353. 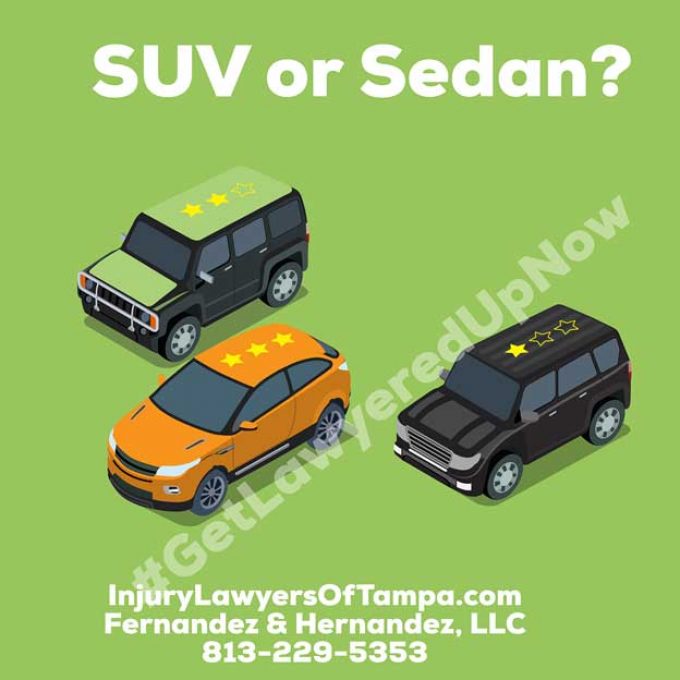 Is an SUV Safer Than A Car In An Accident?

As a Tampa Injury Attorney, I always say that ‘in the battle of the bulge’ the bigger vehicle wins. But does it mean that it is safer? Does that mean that in an accident, an SUV is safer than a car? When shopping for a new car, people usually compare crash-test ratings. Whether from the government or the insurance industry, crash-test scores provide valuable insight into the occupant protection a car provides. But this does give the entire picture.

For instance, the front-crash scores simulate striking a same-sized vehicle. What happens if you hit a larger, heavier, or taller vehicle? Results from a new study being presented by researchers at the University of Buffalo reveals the impact of your car-buying decision.

While the laws of physics dictate that in a crash between mismatched vehicles, the lighter one takes the brunt of the impact, this study shows just how unequal the contest is. Yes, the big one usually wins, but there is more.

Many families who select an SUV over a sedan do so because they feel that they’re safer driving higher off the ground. And, according to a recent research study, SUVs have been shown to be much safer than sedans. In fact, an SUV driver or passenger is at least 50 percent more likely to survive a car crash without suffering serious injuries than an individual riding in a sedan.

Is an SUV versus SUV Accident Safer Than a Car versus SUV?

Studies have shown that sedans are safest in a crash if it involves two similarly-sized ones. The same doesn’t appear to be the case with SUVs though. Even if they’re comparable in size, they’re likely to crush one another. This is, in turn, likely to lead to more catastrophic injuries.

Researchers note that SUVs are particularly well-equipped to protect kids. That’s because, unlike the minivan that is lighter and has a lower center of gravity, the SUV is higher up and reinforced to be able to handle impact. This is particularly important given that SUVs are involved in accidents more frequently than sedans.

Unfortunately, though, if the driver of a sedan becomes involved in a crash with an SUV driver, he or she is not as likely to survive it. In fact, researchers with the University of Buffalo recently analyzed a series of head-on crashes between a single sedan and an SUV. They found that the sedan’s driver was nearly 8 percent more likely to be killed in the crash than an SUV driver.

Is an SUV More Likely to Rollover than a Car?

Now on a personal note, as a Tampa Injury Lawyer I interview and investigate between 400 and 500 car accidents a year. In 2017, we investigated 486. Of those 486, 14 involved a rollover type accident. Fewer than 3%. Of those of rollovers 9 were SUVs and 5 were sedans. Of those 5, 2 were struck by SUVs. This is consistent with the numbers NHTSA found in a 2000 study.

Make your own conclusion as to the numbers, but my point is that SUVs are at a greater likelihood of a rollover.

What Safety Features Should I Look for in an SUV?

Researchers emphasize that those looking to buy SUVs should focus on the active safety options they offer. Some examples of these include blind-spot cameras, automatic braking and traction control systems.

At the same time, they note that buyers of sedans should focus on passive safety features. Some examples of these include sizable crumple zones, airbags and variable seat belts.

In car vs. SUV head-on crashes, the study found that the odds of death were 7.6 times higher for the car driver than the SUV driver. In crashes where the car had a better front crash-test rating than the SUV did, the car’s driver fared a bit better but was still four and a half times more likely to die than the SUV driver.

As a Tampa auto accident (car accident) attorney, I have looked at various studies and found Access Magazine’s article easiest to understand. The study looked at information from severe head-on crashes in the government-managed FARS (Fatality Analysis Reporting System) database. In particular, the authors were looking to see what role car-type played in the outcome and how reliably crash scores predicted survival. The data sample included 83,251 crashes.

The researchers concluded that at least for head-on crashes, the vehicle type is more important than the crash-test rating in predicting survival. It’s correct that you can’t assume that a good crash-test score is some sort of guarantee. But there is more to choosing a safe vehicle than simply picking a big one.

Choosing an SUV for safety isn’t an automatic win, as their higher center of gravity makes them more prone to rollover, an often fatal event. Electronic stability control (ESC) substantially reduces rollover risk, and we highly recommend it when shopping for a used vehicle. ESC has been mandatory since the 2012 model year and was widespread for several years before then. It is telling that most of the 6,800 occupants killed in rollovers in 2010 were not wearing seat belts, suggesting that many of those deaths were easily preventable. (Learn more in ‘Rollover 101.’)

How to choose a safe car?

Just because a big, heavy vehicle has the advantage in a head-on with a smaller, lighter one, it doesn’t mean that lighter vehicles are unsafe. In truth, they’re safer than ever and overall traffic fatalities are near their all-time low. But do choose a vehicle with up-to-date safety equipment, such as anti lock brakes, curtain airbags, and stability control. And choose one that has performed well in the various government and insurance industry crash tests. It should also have done well in the Consumer Reports’ dynamic tests, such as accident avoidance and wet/dry braking. Even better than surviving a crash is avoiding one in the first place.

After that, it is up to the driver to buckle up, stay sober and alert, and maintain a safe speed. That’s the best way to maximize your odds of survival, no matter what size car you drive. For a good in depth article about this issue, read Access Magazine’s article on safety of SUV vs Cars. Be sure to also buy enough auto insurance, especially Underinsured/Uninsured Motorist coverage.

Attorney Martin J. Hernandez of Fernandez & Hernandez, LLC in Tampa provides legal representation for families in auto accident injury and wrongful death cases. Our Tampa personal injury attorneys welcome the opportunity to interview with you and your loved ones. We invite you to review our recent results from settlements to trial verdicts. Our qualifications and background are available to you as well. Our Tampa Attorneys Martin Hernandez and Daniel Fernandez are bilingual as well. Just call us at 813-229-5353 or check us out online for your free consultation.

If you have been involved in an Auto Accident in the Tampa Bay area, call Tampa personal injury lawyer Martin J. Hernandez of Fernandez & Hernandez for a free consultation now. We recommend also reading his reviews on Google Reviews, Avvo and Yelp.

Call Tampa Personal Injury Attorney, Martin J. Hernandez of Fernandez & Hernandez at 813-229-5353 or get signed up with your free case review online today.

Do I Have To Pay Back My Health Insurance For What They Paid After A Car Accident?

How Long Do I Have To File Suit After A Florida Auto Accident?

Do I Have To Pay Back My Health Insurance For What They Paid After A Car Accident?

How Long Do I Have To File Suit After A Florida Auto Accident?

What Type of Injury Is Most Common In T-Bone Accidents?